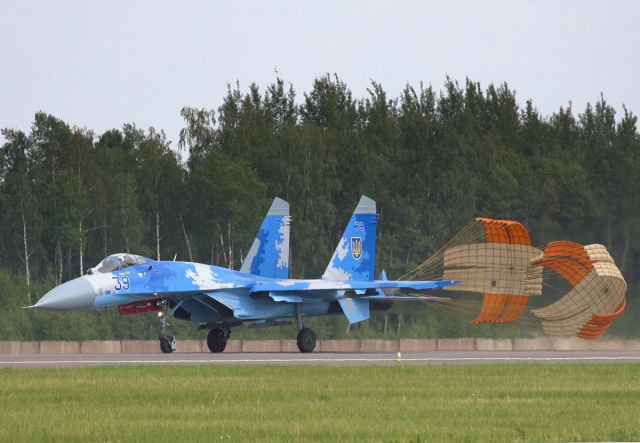 On Thursday 24 February 2022 around 06:15 hrs LT two Fortele Aeriene ale Romanei (FAR, Romanian Air Force) F-16 Fighting Falcons took off to clarify an air situation regarding an unauthorised flight in the northern part of Romania, which was approaching the Romanian airspace.

When the unknown aircraft was in Romanian airspace it was visually identified as a Ukrainian Air Force (VVS UKraine) Sukhoi Su-27. The F-16s escorted the fighter for immediate landing at Baza 95 Aeriana, Bacau in northern Romania around 07:05 hrs LT. After landing the Ukrainian military pilot turned himself in to the Romanian authorities and the legal measures required in these situations will be taken.

Romania strictly applied the national procedures and international rules applicable in such situations, proceeding to the interception and visual identification of the aircraft that entered the Romanian airspace.

According to a communiqué of the MoD: “The leadership of the Ministry of National Defense has taken all the necessary reaction measures, both those that belong directly to the institution and those of support for the other components of the national security system, according tot he insterinstitutional cooperation plans, elaborated in time”.