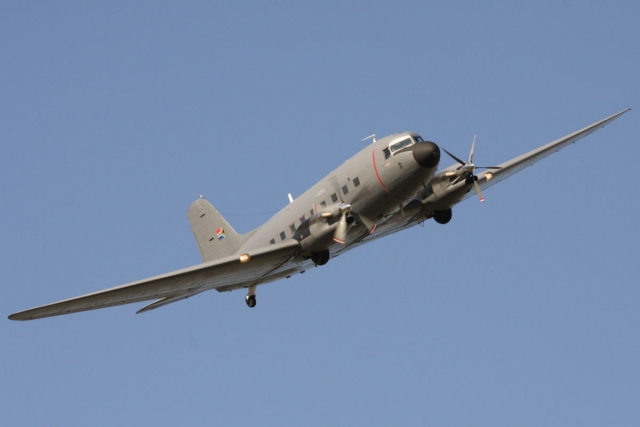 The Dakotas have been in service with the South African Air Force (SAAF) since 1943 in configurations ranging from transport (cargo and passengers) to jump aircraft for Parabats (Parachute Battalion), and maritime patrol and surveillance. The remaining handful of C-47TP Turbo Dakotas in service with 35 Squadron at Air Force Base (AFB) Ysterplaat are in line for maintenance.

The upgrade to turbine from piston engines in 1994 was seen as a short term replacement in the maritime role following retirement of the Avro Shackleton long-range maritime patrol aircraft (MPA). That no replacement platform for maritime patrol and surveillance was ever acquired means that the remaining nine C-47TPs, still fill that role to a certain extent today.

The limitations in maritime ability are made even more glaring when taking into consideration there are officially nine C-47TPs on the strength of 35 Squadron with five “realistically available for use”, however the reality is even gloomier as only one is currently operational but it is also undergoing servicing.

The C-47TP fleet maintenance budget is the lowest of all types in SAAF service, given its lack of sophistication, the aircraft is generally regarded as a cheap aircraft to maintain. The engines are popular and in service worldwide in large numbers with spares easy to acquire. The avionics, civilian in standard, are ageing and require replacement/upgrade, but still maintainable. As the fleet of C-47s internationally becomes smaller, accessing spares will be progressively more difficult and expensive to acquire.

Taking the dire financial situation of the SAAF into account, there is no budget for acquisition – either new or previously operated – to fulfil the roles “intended” for the C-47TP. The SAAF therefore has no option but to keep the C47-TP fleet in service for as long as possible.