In December 2021, the Malaysia Ministry of Defence (MoD) initially accepted six MD Helicopters Inc. (MDHI) MD530G Scout Attack helicopters via their agent Halaman Optima/ Destini Prima. The six MD530Gs are now in transit to Malaysia for final acceptance and expected to arrive by the end of the first quarter of 2022.

As part of the contract eight pilots and nine mechanics from the 881st Regiment of the Tentera Darat Malaysia (TDM, Malaysia Army Aviation) have completed forward arming and refuelling point (FARP) operations training on a range in western Texas, with the MD530Gs carrying US civil registrations.

Malaysia ordered the MD530G back in 2016. Delivery was originally supposed to take place in two batches, the first two by July 2017, with the other four scheduled to arrive by December 2018. But delivery has repeatedly been pushed back over 'technical' and other issues. Last year the acceptance of the new helicopters was delayed after a first round of inspections in June and July 2021 found 'critical equipment and essential software' needed to be rectified prior to acceptance. 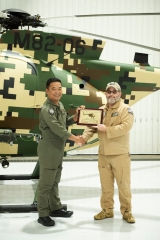 The MD530Gs will be registered as M82-01 to M82-06. All six were cancelled from the US register on 16 and 17 December 2021 as exported to Malaysia. Details of the helicopters are as follows, tie-up to the M82-xx serials needs to be confirmed, but most probably in sequence of construction number: