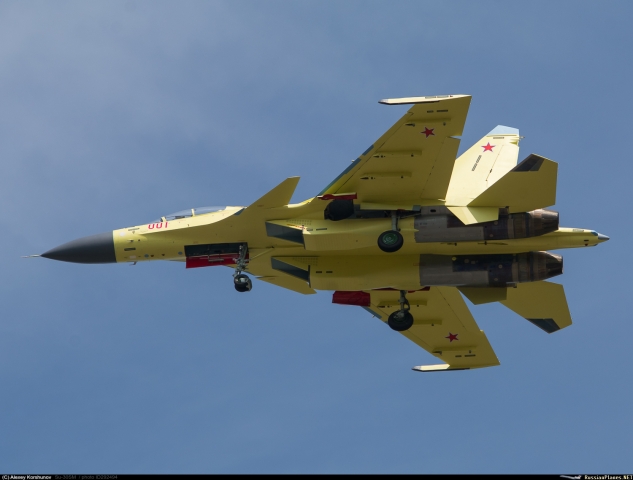 On 21 September 2021, a high-quality photo of a prototype of a modernized version of the Su-30SM fighter has appeared on the internet.

While painted in yellow primer, it bears the red star identification marks of the Russian Federation - Aerospace Forces (RF VKS) and an atypical side number 001 Red.

This aircraft has been photographed earlier by spotters from a large distance on 10 August 2021 on a landing approach at Omsk during the ferry flight from Irkutsk to Zhukovsky. There were some speculations about the 001 being the first prototype for the Su-30SM2 version, which should have its powerplants and internal systems unified with the Su-35S, but the high quality photo reveals the engines are still of the Al-31FP type rather than Izd.117S.

There is no information about the change in internal systems of the aircraft, as of yet, but according to available information the Su-30SME should have the foreign content (most notably the CMFD-55/66 displays by Samtel, VEH-3022 HUD by Thomas Electronics, Totem INS/GPS or ILS indicator by Thales) replaced by domestic components. Therefore, so far the only visible identification of the new Su-30SME on the photo are the formation lights, installed in a manner similar to the MiG-35 and Su-35S.

Russia has unveiled the export version of the Sukhoi Su-30SM at the Singapore Airshow 2016 and reckoned some interest from Southeast Asian, Middle East and North African countries. So far the most notable client for the jets is Bangladesh whose Directorate General of Defense Procurement of Bangladesh (DGDP) has approved a contract for eight Su-30SME fighters with an option for four back in April 2017. In general, the Bangladesh Air Force expects to acquire twelve Su-30SME and 32 MiG-35 multipurpose fighters by 2030 as a replacement for current fleet of A-5C Fantan and Chengdu F-7MB fighters.

Local military sources argue the country was originally not interested in the MiG, but Russia only offered to sell Sukhoi Su-30SME in a hi-lo mix package with the MiG-35. Furthermore, in an effort to diversify its defense equipment sourcing, the Bangladesh Biman Bahinii (Bangladesh Air Force) also plans to induce twelve Eurofighter Typhoons. However, no information on a possible Typhoon deal is known.

Another client for the Su-30SME is Myanmar who has placed an order for six Su-30SME jets alongside the Yak-130 training aircraft back in 2018, during the visit of Russian Defence minister Sergey Shoigu to the country. It is believed that the total number of Su-30SME jets for Myanmar should reach 20+ units.

Photo by Alexey Korshunov via RussianPlanes.NET