Albacete Airport is situated east of Madrid, at an altitude of seven hundred metres above sea level. It is located in the area known as Los Llanos, within the Albacete city limits. Los Llanos airport's origins date back to 1913, however, due to budget restraints the airport was not finished. In 1929 the Spanish Aviation Company (CEA) took charge of pilot training and was settled at Albacete. During the civil war, the aerodrome was used by the military rebels and, from 26 July 1936, by the Republicans. Once the war was over, the Air Force set up the 13th Bomber Squadron in Los Llanos with former Republican aircraft. This unit later became Ala 26. The government acquired the aerodrome and it opened to civil traffic in July 1946. Work was carried out, including pavement and subsequent extension of runway 28-10, 2,250 by 65 metres. Due to the scarcity of civil traffic and the fact the air base was increasingly used for military purposes, it was closed to civil traffic in 1955. Ten years later it was reopened for the Albacete Flying Club. In 1962, this unit was replaced by Ala 37, equipped with the DC-3 cargo aircraft. Again, this unit was replaced by Ala14 in 1975, turning the base into a fighter town.

In 1991, a non aeronautical event changed the airport's activity. The Albacete Balompié football team moved up to the first division and charters were used to transfer the football teams. In 1992, a travel agency began to arrange Albacete – Palma de Mallorca charter flights with great success. In November 2005, the Ministry of Public Works inaugurated the new Terminal Building, with a surface area of over 2,200 square metres. The parking apron, with an area of some 20,000 square metres, has capacity for two B737s and four light aircraft. At this moment, the airport is used by Spanish Air Force Eurofighters, NATO's Tactical Leadership Program and limited civil traffic. Also, La Maestranza Aérea de Albacete is responsible for the modifications and overhaul aircraft such as the Canadair CL-215 and C-101, and Airbus Helicopters can be found on the south west side

Spotting is not very common in Spain and the Military Police/Guardia Civil could ask for your passport or remove you from your spot. Please keep a distance of 300 meters from the fence of the airport at all times, as show at our spots. Cooperate with the authorities. Please keep this distance and let the authorities get used to spotters.

The airport has a east-west orientated runway. In the southwest is the civil terminal. To the north are the military aprons. The apron to the northwest is used by La Maestranza, the apron in the middle is for the TLP and the dispersals and apron in the northeast are used by Ala 14.

The airport can be reached from the main city Albacete via the Autovia de Alicante/A-31 onto the Autovia de Murcia/A-30. At the next exit, take the N-301a back to Albacete to arrive at the east gate. With easterly winds, take the N-301a ring road and exit via the CM-3203 to Penas de San Pedro. The Airport has a civil terminal so you could take a flight into Albacete. When travelling by (high speed)train, you have to disembark in Albacete.

With westerly landings, this is the spot for photography. The sun is in your back the better part of the day. After leaving the Autovia de Murcia/A-30, take the N-301a back to Albacete. After leaving the roundabout, there is a small road to the left. Take this and take the next small road to the right, to drive along the N-301a. Park your car at the crossing and walk forward to your best spot.

At the N-301a at the first roundabout take the road to the left. This road will lead you to the gate. Here you can see the preserved T-33A.

The west gate into La Maestranza can be reached via the dirt road on the north side of the base. From the N-301a ring road, take the exit to the west gate and take the dirt road after the road blocks. You will leave this dirt road near a restaurant. Take a left onto the roundabout and the third exit which will lead to the gate. Behind the gate, on a square surrounded by trees, preserved aircraft can be seen.

With easterly winds, this is the place to be. Take the CM-3203 to the south. After passing the runway, there is a small road to the right. Take this one and park your car. Walk along the tree line to a good position.

The civil terminal can be reached via the CM-3203. After passing the runway, take the road to the left and you will reach the civil terminal. Aircraft can be spotted here, for photography you will be limited to departing traffic to the west. 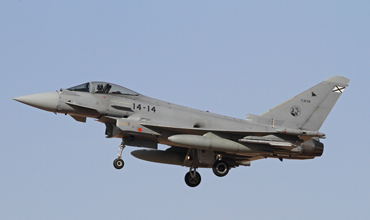 At spot 1, local EF-2000s can be photographed like this. (Niels Quist) 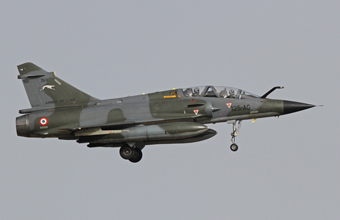 The west side approach offers the chance of capturing shots of the many aircraft that participate in the TLP. (spot 4, Niels Quist)