Brief History
The Bolivian Republic was proclaimed on 6 August 1825. For a country with a capital whose name means 'peace', it has a very turbulent history, being the only country in the world to have five presidents on one single day, 3 October 1970. Bolivia has seen many revolutions ('cuartelazos') so far - the last one on 17 July 1980 being the 189th! - not to mention several unsuccessful boundary disputes; it lost its four seaports , Antofagasta, Clama, Tocopilla and Mejillones, to Chile in 1879, some areas to Brazil and Peru, and in the disastrous Chaco War (1932-1935) it lost most of the Gran Chaco and its only port on the Paraguay River, an indirect outlet to the Atlantic.

Brief History
Military aviation in Bolivia began in 1917, with the training of three Army officers at the El Palomar aviation school in Argentina, but the Cuerpo de Aviadores Militares Bolivianos (Bolivian Military Aviators Corps) was not officially formed until 1924, during the celebrations of Bolivia's first centenary of independence. In the year 1932 the Gran Chaco dispute between Bolivia and Paraguay had evolved into a shooting war and by this period they changed the name into Cuerpo de Aviación (Aviation Corps). It was actually the first in the Latin Americas with air combat. The war ended in 1935. Bolivia was defeated and economically exhausted, and it was clearly impossible to carry on the long-delayed re-organisation of the Cuerpo, at least without outside help.

The Cuerpo de Aviación was further re-organised in 1944 along USAAF lines to become the Fuerza Aérea Boliviana (Bolivian Air Force), with most of its aircraft of US manufacture. The FAB was at first under partial Army control, but became totally independent in 1957. Bolivia signed the Rio Pact in 1947 and the usual Military Assistance Program deliveries followed - initially small numbers of North American AT-6 Texan armed trainers and B-25J Mitchell bombers, followed in mid-1956 by seven Boeing B-17G Fortress bomber/transports. Four years later the first real fighter aircraft arrived in the shape of Cavalier modified F-51D Mustangs and large numbers of aircraft from neighbour Brazil, including Brazilian built Fairchild PT-19 trainers and Fokker S-11 basic trainers. In 1973 the FAB entered the jet age with the first of fifteen Canadair T-33 Mk.3 Silver Stars.

In December 1980 permission was granted for the acquisition of up to twenty-four fighters, the Mirage 5, Jaguar and Kfir C2 all being considered, but little seems to have come from this, and there were reports during late 1981 that ex-Belgian Air Force Starfighters may be acquired, however this was all in vain. In 1986 the FAB signed a US$52 million contract with FMA for the delivery of twelve IA.58 Pucará COIN aircraft, however the deal went sour also. In the late 80's, the FAB saw the delivery of a further eighteen former French Air Force Canadair built T-33SF to form another Grupo de Caza. The remaining eighteen aircraft of the T-33 fleet were subsequently modernised by the Kelowna company in Canada, and most of the T-Birds have been returned to Bolivia and are still being operated today. Early this century, the FAB was largely depending on US funds, but this has changed in the last couple of years. Bolivia has turned to new-found ally Venezuela for some support and received two second hand Super Puma helicopters. Also, the air force acquired two AS350 Ecureuils and a number of second BAe146 transport aircraft. Furthermore, military cooperation with China has been set up. This meant another boost to the air force with MA-60 transports and K-8 jet trainers being the most recent deliveries. The training fleet has also been modernised with in the Diamond DA40CS being acquired for basic training.

The FAB has its headquarters in La Paz and comprises about 4500 personnel. The Bolivian Air Force is divided into four Brigadas Aéreas. They are located at El Alto, near the capital city La Paz, Cochabamba, Tarija and Santa Cruz de la Sierra. In addition to these bases the air force uses a number of small airfields located throughout the country. Most of these, such as Ribaralta, Robore, Trinidad and Cobija, house small Grupo Aéreos, which are equipped with a few light transport and liaison aircraft. Bolivia's landscape and infrastructure make transportation of goods and people one of the major tasks of the Bolivian Air Force. Therefore, nearly half of its inventory consists of (light) transport and liaison aircraft, not in the least because drug-running aircraft are being impounded regularly and subsequently taken on charge. The hub of transportation activities is concentrated on El Alto, where Grupo Aéreo de Transporte 71 is located. The greater part of GAT-71 is formed by the semi-military airline Transporte Aéreo Militar. TAM provides regular air services throughout the country and is a cheap alternative to Bolivia's national carriers Lloyd Aéreo Boliviano and Aero Sur.

The Fuerza de Tarea or Task Force, better known as the Diablos Rojos or Red Devils, is the FAB unit that is the most actively involved in the anti-narcotics policy of the Bolivians. The unit used to be paid for and commanded by the Americans. Initally the unit operated 16 Bell UH-1 Huey helicopters which were officially owned by the U.S. Department of State. Nowadays the FAB has taken these Hueys on charge. The fixed wing aircraft are all confiscated during anti-narcotics operations and belong to the FAB. The unit is based in Santa Cruz de la Sierra. Most of its operational missions are flown from an airstrip near Villa Tunari on the edge of the Chapare region, the centre of Bolivias coca production. 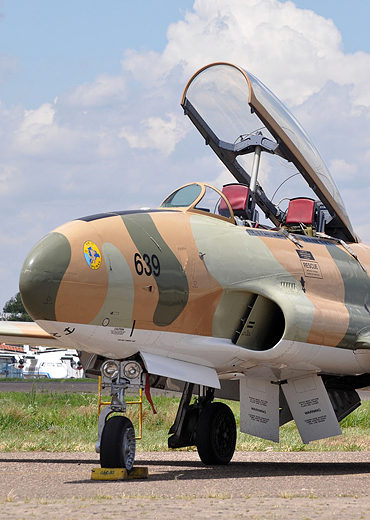 Brief History
The Bolivian army air force has always consisted of a handful of small transport aircraft. In recent years the flying element of the army has gained some momentum with the arrival of a second hand CASA 212 and a F27.

Expansion of aerial operations continued in the 2010's with the arrival of Robinson R44 and Harbin H425 helicopters. In conjunction with this, the first aviation company was formed, the Compañía de Aviacion del Ejército No.1. Within this, the helicopters are operated by the dedicated air cavalry group, Grupo de Caballeria Aérea I. 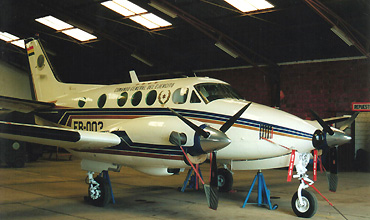 Brief History
The minute naval aviation has been around since 1968 when a single Ce182 was operated, followed shortly afterwards by two second hand Harvards obtained from Argentina. Later the Cessna single was superseded by a Ce206, delivered in 1975 but not operated anymore in the mid-eighties when a Ce402 was acquired. None of these are currently operational, the only active aircraft is a Ce340A that was acquired in 2010.

Brief History
Police aviation in Bolivia is the most recent aerial force. To this end, the Servicio Aéreo Policial de Seguridad Ciudadana was formed on 4 April 2012. It ressorts under the Dirección Departamental of the Policia Boliviana. Equipment is a couple of Robinson R44 helicopters obtained in 2013. 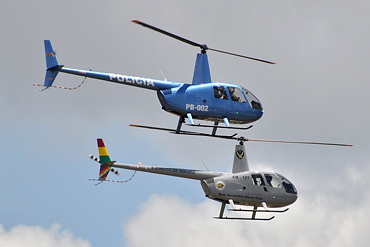 Brief History
The last state organization in this line up that operates aicraft is the civil aircraft authority. For flight checking and training they operate a fleet of single and twin engined props. They can be found at Cochabamba, La Paz and Santa Cruz.