Finnish Air Force / Ilmavoimat
Finland became independent on the 6th of December 1917. It fought two wars against Soviet demands and finally reached an armastice with the Soviet Union. From that moment Finland maintained a position of neutrality in international affairs. Under the 1947 Peace Treaty, its Armed Forces were limited in both equipment and personal strength.

Ilmavoimat
The Air Force was formed on 6 March 1918 and currently is a small but surprisingly well-trained force. It is also backed by an efficient aircraft industry. The latest example is the assembly at Finavitec of the newest fighter (Hornet) in the Finnish inventory. Ilmavoimat's first-line units used to form three Lennostot or Wings, each being assigned to an Air Defence Area; Lapin Lennosto in Lapland (North), Satakunnan Lennosto in Satakunta (West) and Karjalan Lennosto in Finnish Karelia (East). Starting in June 2014 the first line units were reduced to two wings, HävLLv 21 at Tampere/Pirrkala was disbanded.

Operating alongside these units are a Training Wing and a Liaison Squadron. Beside these units there is a Test Squadron, which operates various aircraft on loan from other units. The basic flying unit is the Lentolaivue or Air Squadron, of which there are two kinds; Hävittäjälentolaivue - HävLLv - or fighter squadron and Tukilentolaivue - TukiLLv - or liaison squadron. Each comprises several Flights.

As from 2006, all Hawk training aircraft were transferred from individual bases to Kauhava, where they formed the newly established HävLLv 41. By the end of 2014, all Hawks were flown to Tikkakoski were the Air Force Acadamy is located. Kauhava airfield and garrison were handed over to a new private owner. New pilots start with the basic education in Tikkakoski and will then go on to the Phase Two training syllabus on the Hawk. After graduation the more specific fighter pilot training will be executed with one of the Hornet squadrons.

Maavoimat / Finnish Army
In January 1997 the helicopters of the former Kuljetuslentolaivue - KuljLLv - or transport squadron were transferred to the army (Maavoimat). The flying unit was named HekoLtue or Helicopter flight of the Utti Jägerregiment (Utin Jääkärirykmentti). In January 2001 the flight was renamed Helikopteripataljoona - HeKop - or Helicopter Battalion. The Battalion consists of two companies which are numbered 1.HK and 2.HK (Helikopterikomppannia). The Army aviation ordered 20 NH90 helicopters, the first one was delivered in April 2008. In August 2011, the last two Mi-8 transport helicopters were withdrawn from service.

Finnish serial numbers consist of a two-letter prefix identifying the aircraft type and a sequential number of up to three digits. 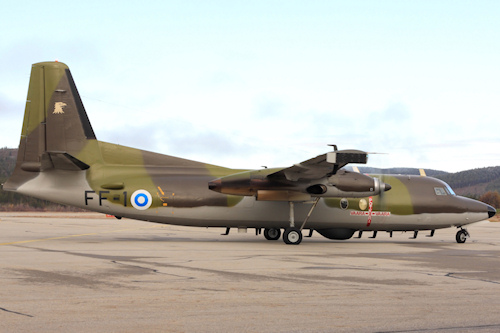