Paraguay is bordered by Bolivia, Argentina and Brazil. It has a troubled history, after independence May 17th 1811 it suffered invasions from all its neighbours over the years. Most significant was the war of the Triple Alliance in the 1860s in which the size of the country was diminished by two-thirds after nearly 80 percent of its male population was wiped out by Argentina, Brazil and Uruguay. The Chaco War in the 1930s saw heavy battle again, with Bolivia this time. Bolivia was desperate to find a river port with an outlet to sea but the Chaco was successfully defended by Paraguay although they were in the minority both in man and machinery.

The second half of last century was dominated by president Stroessner who came to power in 1954. His reign lasted until 1989 when he was ousted by an army supported a coup d'Etat. In the election that followed the leader of the coup general Rodriguez was chosen as president.

Brief history
The birth of the air force can be traced back to 1912 when an army officer was sent to France to train. He brought back the first aircraft for military use, a monoplane of unknown subtype. In these early years small numbers of European aircraft were used to form a small air element (sometimes referred to as the Escuela de Aeronautica Militar). Typical aircraft were a single Bleriot, a Deperdussin T, and a Farman. By the early 1920s the force was augmented by various other aircraft in somewhat larger numbers: five Ansaldo SVA-5 and a single SVA-10, an Avro 504K, a Spad S-20, a Caproni hydroplane, a DH.6, three Hanriot HD.1, a Lohner-Macchi L-3, a Macchi M-7, a Nieuport 7 a SAML S1 and S3. This motley collection of aircraft was partly used during the 1922 civil war and revolution.

In an effort to structure these air assets the Escuela de Aviacion Militar was formed in the early twenties and this eventually led to the inception of the Fuerza Aereas del Ejercito Nacional Paraguayo in 1927 much helped by a French mission that arrived in 1926. Military aviation was still a part of the regular army and at the start of the Chaco War with Bolivia in 1932 the air arm had about thirty aircraft - ten of which could be dubbed as 'combat aircraft'. It was organized into a fighter and a bomber/reconnaissance squadron flying six Potez 25 and four Wibault 73 respectively. By then it was known as the Fuerzas Aereas Nacional del Paraguay and led by an Argentinean. The air force served admirably in the harsh war conditions but also suffered many losses, mostly due to accidents. The air force was strengthened by evading arms embargoes and most noteworthy acquisitions were seven more Potez 25, two DH.60, five Fiat CR.20bis, a Consolidated 21C, a single Breda 44, two Travel Air 6000 and two JuA50F. 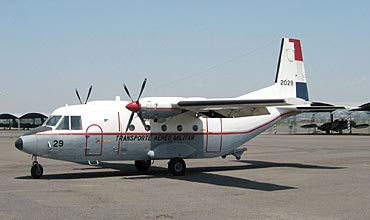 After the Chaco War it took some years for the air force to become an independent defence force in 1946. It split into two factions the next year, each bombing the forces of the other side in the 1947 civil war. After regular operations were restored in the late 1940s, the force began to be expanded with the delivery of the first of a number of transports provided by the United States. A paratroop unit was added in 1949. During the 1950s and 1960s, the nation acquired surplus aircraft from Argentina and Brazil. After 1975, however, Brazil emerged as the principal source.

From the eighties onward the air force was organized into three squadrons. The first was a composite squadron headquartered at Campo Grande. It flew the nation's only combat planes: Brazilian-made EMB326 Xavante light counter-insurgency aircraft later augmented by six T-33 supplied by Taiwan. The composite squadron also had a few Cessna liaison aircraft and ten helicopters. Most of the composite squadron, including the Xavantes, were based at Asunción International Airport (formerly known as Alfredo Stroessner, now called Silvio Pettirossi). The second squadron performed transport missions and had a number of C-47s about 40 of which were used over the years, the survivors still being active in 2004. More modern transports arrived from 1984 in the shape of four C212 Aviocars. Its assets were located both at Asunción International Airport and at Ñu-Guazú. The third squadron performed training missions out of Ñu-Guazú and flew ex-Chilean T-25 Universals, Brazilian T-23 Uirupurus, and United States T-6s acquired from Brazil and South-Africa. Primary flight training was on the Uirupurus; students then moved on to the Universals. Some of the Harvards were used to perform aerobatics in the Escuadrilla Aru-Sunu and the last surviving T-6s were painted in the white and red colours of this team. These aircraft were superseded by ENAER T-35 Pilláns and EMB312 Tucanos that are used in the counter-insurgency role as well. 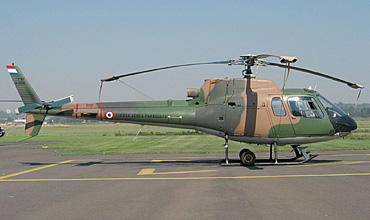 The current air force is formed by brigades and commands. The first brigade controls seven Grupo Aereos each with a different task. The Grupo Aerotáctico (GAT) forms the fighting force with EMB326, AT-33 and EMB312 aircraft whereas transport, liaison, instruction, helicopter, aerial photography and maintenance groups control the remainder of the aircraft. The two main bases are Silvio Pettirossi Asunción IAP and nearby Ñu-Guazú, the instruction group is believed to have moved to new facilities at Concepción in central Paraguay. The three other commands within the air force do not have aircraft of their own. The Brigada Aerotransportada (BAT) at Ñu-Guazú uses GTA aircraft for its paratroopers. The Comando de Institutos Aeronáuticos de Enseñanza (CIARE), also at Ñu-Guazú, is the training command responsible for the education of all officers. Lastly, the Comando de Regiones Aéreas (CRA) controls all infrastructure (twelve bases in total). The FAP is looking for modernisation of its fleet but lacks budget for new combat aircraft. The deal to obtain twelve F-5E/F aircraft in the late 1990s from Taiwan fell through due to lack of funds to operate them as well as restrictions of the facilities in use at Silvio Pettirossi necessitating considerable investments in infrastructure. Latest acquisitions consist of six T-25 and three T-27 received second hand from Brazil. Moreover, .the remaining aircraft were taken up by the air force. Many plans for more aircraft come and go. These will most likely include some CASA transports and a new VIP jet aircraft.

Brief history
The origins of the naval air arm of Paraguay date back to the late 1920s. It started with a single CANT-10 and a SIAI S59bis in 1929 followed by two Macchi M18s in 1933. The navy was also blooded in the Chaco War tasked with defending supply lines and the river port of Puerto Casado. After the war it was absorbed into the army air force only to become a separate force in the fifties again. The backbone of the Aviación de la Armada del Paraguay was formed by Grumman flying boats (a single Duck and about four Gooses) , three RC-3 Seabees and three BT-13.

In the seventies the first helicopters arrived, these were four Bell 47. Two Hiller UH-12s were obtained in the early eighties and the pride of the force, two HB350B, arrived in July 1985. The fixed wing fleet is dominated by single and twin-engined Cessnas. Today, after some name changes, the service is called Aviación Naval Paraguaya. The helicopters are based at Sajonia on the banks of the Paraguay river in the outskirts of Asunción whereas the fixed wing fleet is at Silvio Pettirossi IAP near the general aviation ramp. 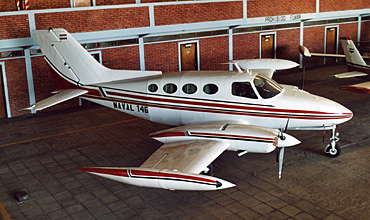 Brief history
Paraguayan army aviation, apart from the early aviation years, is now no longer an independent air arm. It used to operate a Beech 58, Ce206, and a Ce310. These were already maintained and operated by the FAP with Ejército serials, but have been included in the air force inventory recently. They can be found at Ñu-Guazú with the Grupo Aéreo de Transporte Especiales (GATE).