There’s a proposal out there to turn the Il-496 into a twin,
using PD-35 engines that will produce close to 80,000lbs of thrust.
Apparently, that could happen around 2025,
though by then the Sino-Russian CR929 may be well under development.

...and this project is for real:
https://www.aerotime.aero/ina.hladyshav ... -interiors

On March 20, 2019, during the round-table with potential buyers,
Ilyushin presented several options for aircraft interior modification,
claiming that at this stage any individual modification request can be accepted and implemented to clients’ needs.

Earlier in November, the factory reported it was taking delivery of some structural components and
was starting subassembly of the new version’s wing and fuselage.
The design documentation for the complete aircraft is currently also being finalised.

The Ilyushin IL-96-400M is a new passenger version,
featuring a 9.65-metre longer, extended fuselage and an additional 20 tonnes of maximum take off weight (MTOW)
compared with the original, base IL-96-400T cargo version.

With a projected passenger capacity of 390 seats,
the first flight of the aircraft – powered by Russian-made PS-90A1 engines – is scheduled for next year.

At the beginning of 2018, the Russian government allocated 1.32 billion roubles to United Aircraft Corporation (UAC),
parent of the Voronezh Aviation Plant,
for the necessary reconstruction and technical upgrade
of the manufacturing facilities designated for serial assembly of the IL-96-400M.

is nevertheless aimed at sustaining and developing the all-round competences of VASO.

The first flying prototype is currently at the final assembly stage,
but there are still no customers
for the upgraded Russian-built widebody

Russian aircraft manufacturer Ilyushin (IL), which is part of United Aircraft Corporation (UAC),
has reported that the first flying prototype of its IL-96-400M modernised widebody airliner
has reached the final assembly stage at the Voronezh Aircraft Production Association (VASO) plant.

It means that the upgraded four-engine wide-body airliner programme
is nearing the first flight stage,
albeit with a two-year delay and
with no commercial airline thus far having announced a willingness to act as the launch customer for the aircraft.

VASO has now attached the wing to the fuselage
and commenced the installation of flight control systems and cabin interior, Ilyushin’s statement reads.

The flight test prototype’s final assembly is due to be completed before the end of this year,
followed by a series of ground tests.
Thus the first IL-96-400M will not take to the skies before 2021.

The programme, which kicked off in 2016,
was initially scheduled to reach the maiden flight stage in 2019 so that, by 2021,
the first two serially built airliners would enter service with as yet non-existing customers.

In a December interview with state-controlled RIA Novosti newswire,
Ilyushin’s general director Yury Grudinin attributed the delays to the complexity of the “serious upgrade” of the aircraft’s platform,
and to VASO’s tight schedules.

“A minor shift of the maiden flight [date] may occur due to the Voronezh plant being busy with other projects.
It is steadily loaded through to 2026.”

...and more information can be found thru
http://www.rusaviainsider.com/the-first ... next-year/ 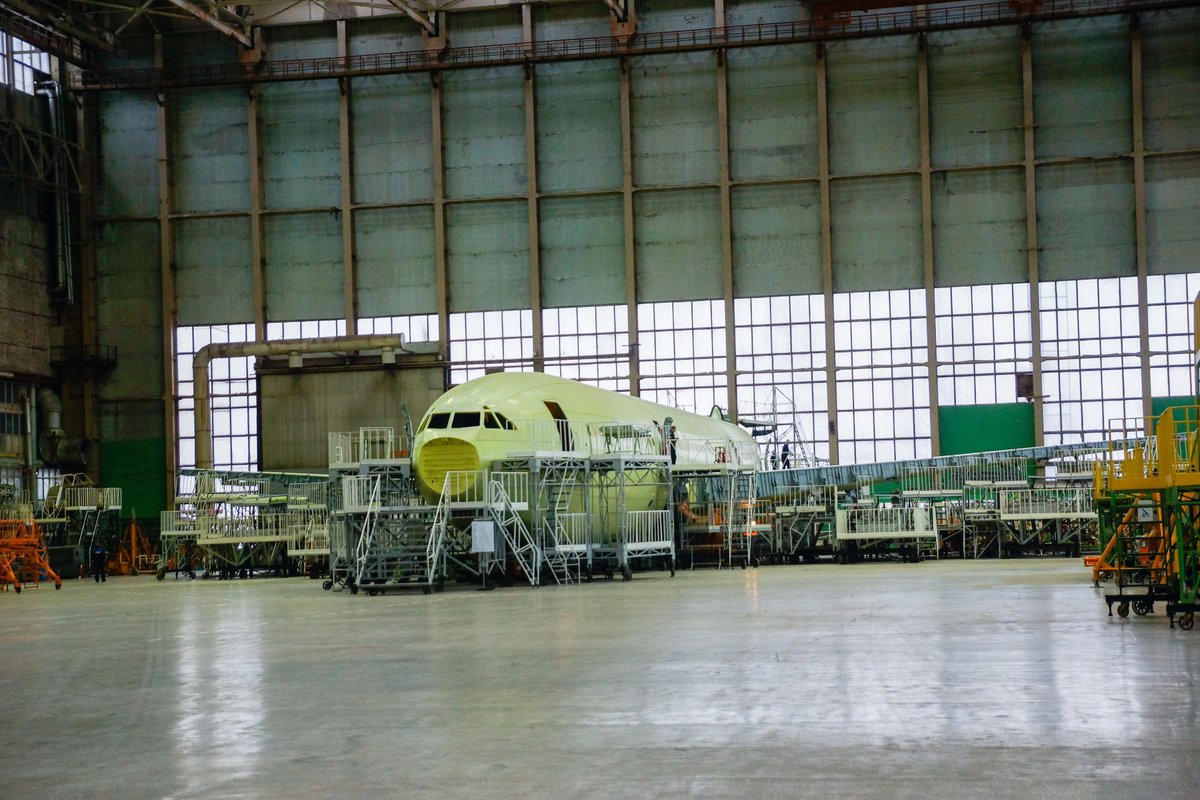 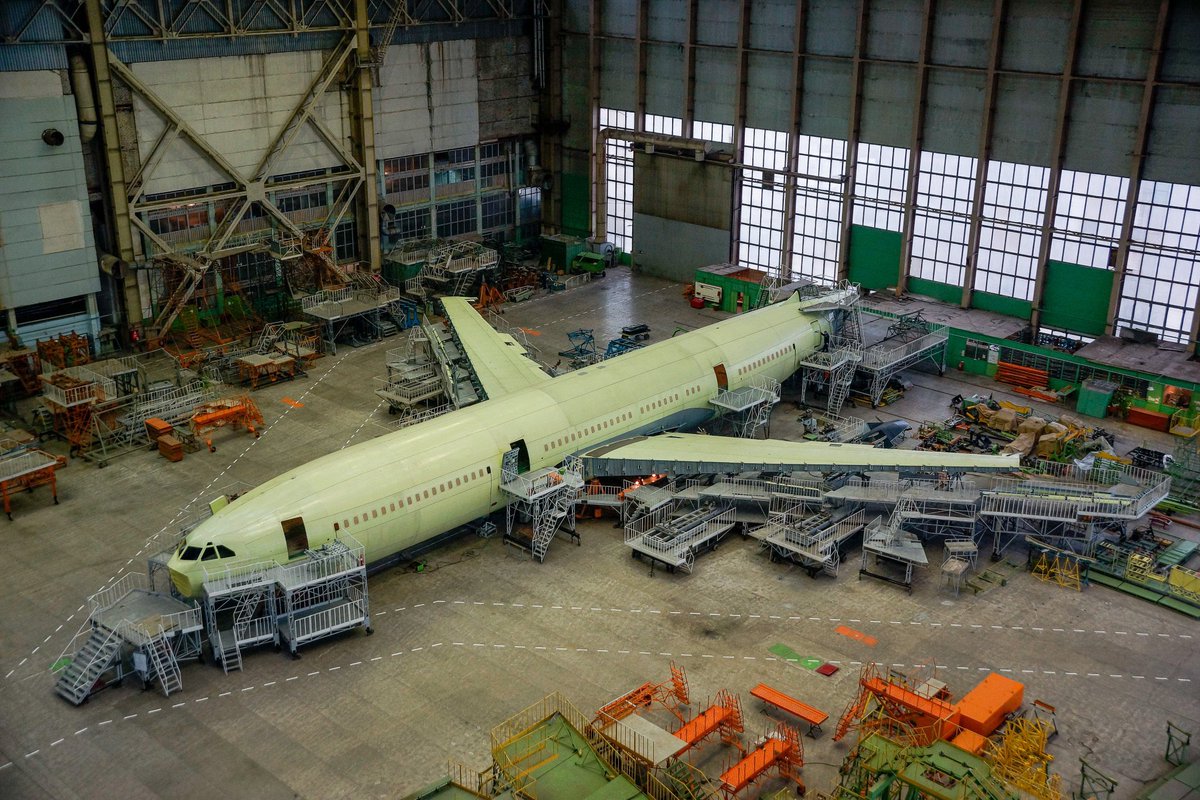 
United Aircraft is set to begin mating of the tail and engine pylons for the first Ilyushin Il-96-400M,
which is undergoing assembly at the Voronezh-based VSO plant.

United Aircraft says the programme is on schedule, adding:
“The aircraft will retain the high reliability indicators of its predecessor.”

Work has continued on the aircraft despite the global depletion of air traffic which has, in turn,
resulted in a cull of four-engined airliners including the Airbus A380, A340 and Boeing 747.

VASO acting managing director Alexander Yarchevsky says work on the Il-96-400M
is scheduled for completion this year, along with transfer of the jet to the flight-test station.

«At the moment, the main parts of the airframe for the first flight prototype are being connected.
The process of affixing the wing to the fuselage is completed.
At the next stage, we are going to set the empennage and the pylons.
Our specialists are carring out the installation of the main aircraft systems.
The aircraft is intended to be finished before the end of 2020,
at which point it will be sent to the flight test station,
»- said Alexander Yarchevsky, acting Managing Director of VASO.

Neither airliner nor Putin’s jet: Il-96-400M to become doomsday plane

The two prototypes of Il-96-400M, the canceled Russian wide-body airliner, are going to become doomsday planes.

Previous reports indicated that the planes were to be turned into VIP transporters
for carrying Russia’s top officials.

But on July 26, 2021,
RIA Novosti announced that, according to anonymous sources within the company,
Voronezh Aircraft Production Association was working on the project “Zveno-3S”
– the construction of two so-called doomsday planes,
flying command posts to be used in the event of nuclear war.

“Russian Aerospace Forces are going to receive two airborne command posts
based on the Il-96-400M.
One of them is currently in production,” the source said.

The work on the first prototype of the Il-96-400M has been ongoing for several years.
Based on the Il-96, a long-range passenger aircraft that first flew in 1988,
the jet was supposed to become the Russian wide-body airliner of a new generation.

It was intended to be both the stop-gap measure before the Chinese-Russian CR929 entered service,
and a competitor to the Boeing 777X and the Airbus A350 long-range airliners.

In April 2021, it was announced that the idea to mass-produce the airliner was canceled
and only two prototypes were going to be built.