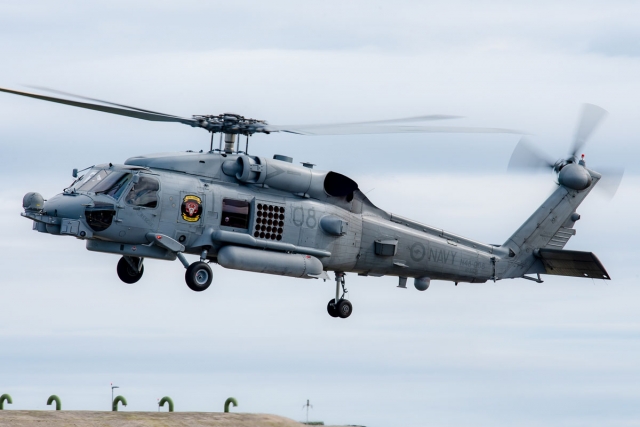 The RAN currently operates 23 Seahawks in the naval combat helicopter role, sufficient to provide eight flights (of a single helicopter) at sea and concurrently deliver shore based training and operational tasking. They are shore-based at HMAS Albatross, near Nowra (NSW) and serve with 725 and 816 Squadrons.

The potential deal for twelve MH-60Rs was outlined in an October 2021 Foreign Military Sales (FMS) notice from the US government, with an additional helicopter to cover one unit lost in a 2021 crash. On 8 October 2021, Scramble Magazine reported on this possible Foreign Military Sale. On top of the order for thirteen Seahawks, Prime Minister Scott Morrison confirmed that the Australian Government added AUD 360 million to expand HMAS Albatross.

Delivery of the additional Seahwaks will start in 2025. With the number of Navy surface combatants set to increase in coming years more flights at sea will be needed, but the RAN also has a requirement to phase out its six MRH90s, which are operated in the utility role from some of its larger surface ships. The MRH90s were first acquired from 2006 but have suffered from poor availability since entering service, forcing the Australian Army to recently lease interim helicopters for training and non-combat transport roles.

Lockheed Martin’s company, Sikorsky Australia, is the RAN’s industry partner for delivering comprehensive deep maintenance services and intermediate level maintenance support for the MH-60R Seahawk. For over 30 years, Sikorsky Australia has proudly sustained the RAN’s Seahawks and the Australian Army’s Black Hawk helicopters, while steadily building its sovereign industrial base in support of the Australian Defence Force’s rotary-wing mission requirements. The Sikorsky Australia team has grown to a 250-strong workforce, with 195 skilled aviation engineers, technicians, and training and logistics employees based at the Nowra headquarters dedicated to maintaining the fleet of MH-60R Seahawks.

The following MH-60Rs are operated by the Royal Australian Navy. We are still looking for the serial of the Seahawk that crashed on 14 October 2021. If you have more information, please let us know.