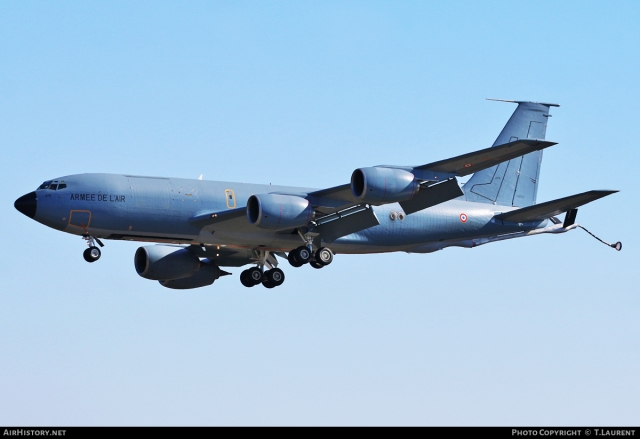 The AdlA started to use twelve Boeing C-135FRs from 1964 onwards. The dozen aircraft were assigned to the French Strategic Air Forces and mainly in use to support the nuclear capable Mirage IVA.

That nuclear deterrence mission was later fulfilled by the Mirage 2000N and now the Rafale B. Of course, other fighter jets of the AdlA as well as their allies were supported by the dozen C-135FRs.

Unfortunately, one C-135FR crashed in Polynesia during a deployment on 30 June 1972. The remaining eleven Stratotankers were re-engined with CFM56 engines in the late 1980s. Three former US Air Force KC-135Rs were added to the fleet in 1997.

The C-135FRs are equipped with one centreline mounted flyable boom. A boom drogue adapter (BDA) can be set for probe equipped aircraft. Also, it is fitted with two wing mounted FRLMk32B air refuelling pods. 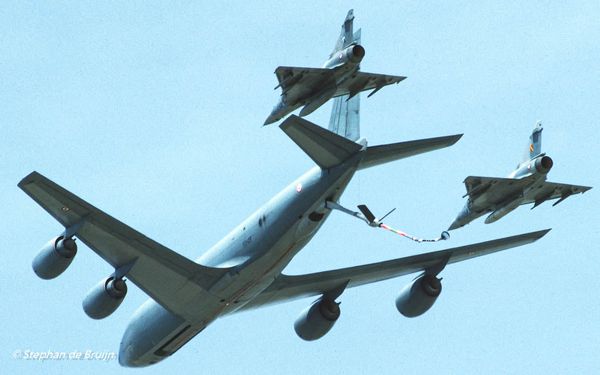 The first retirement of the C-135FR is inevitable as the A330 Multi-Role Tanker Transport (MRTT) "Phenix" within the AdlA slowly takes office. The first of fifteen Phenix' was introduced in the AdlA in September 2018. Three of these modern MRTTs are delivered to l'Escadron de Ravitaillement en Vol et de Transport Stratégiques (ERVTS) 01.031 "Bretagne" so far. The ERVTS is a French abbreviation of the Air Refuelling and Strategic Airlift Squadron.

The C-135FRs are assigned to the ERV04.031 "Sologne" based at Istres-Le Tubé (Base Aerienne 125). The aircraft are often deployed in support of the ongoing Operation Barkhane in Africa and can be found at locations as N'Djamena-Hassan Djamous (Chad) and Niamey-Diori Hamani (Niger). The tankers are also used within the anti-ISIS Operation Chammal, operating out of Abu Dhabi-Al Dhafra air base in the United Arab Emirates.