The former Air Base Deelen is located some 5 km north of Arnhem and 3 km west of the A50 motorway, close to the large gliding site Terlet. Air Base Deelen was founded in 1913 as a base for border patrol missions. When the Netherlands surrendered to Germany in World War II, the Luftwaffe started using the field, significantly expanding and upgrading the base. In 1950, the decision was made to restore Deelen back to an operational air base. Reconnaissance and training aircraft were stationed at Deelen in 1951. For the relatively short time of only five years Deelen was in use for jet-operations (1957-1962: RF-84F Thunderflash). But noise abatement measures resulted in de return of various light aircraft and helicopters. In 1995 the remaining two helicopter squadrons were transferred to Soesterberg. Today Deelen is still in use as a military helicopter training location. Because of the nearby army barracks, operations with the Dutch Air Assault Brigade often take place at Deelen, particularly when the use of helicopters from the Dutch Helicopter Command is required for these operations. Following the closure of Soesterberg in 2008, the aerodrome of Deelen was refurbished to house short term deployments from Gilze Rijen. These deployments may include one or more CH-47, AS532, AH-64D, NH-90 or Alouette 3 helicopters. These types of helicopters can also be seen during simulated emergency landings or during a night vision goggles training flight at dusk.
Additionally and mainly during the summer seasons, the flights of the local glider club may include the use of a tug-aircraft such as a Husky or a Pawnee.

The size of Deelen exceeds the ones of any other military airbase in the Netherlands. This as a result of the extensions that have been carried out during the German occupation during WW2. The remains of this occupation still can be seen at many locations in the surroundings of the former WW2 airbase (barracks, bunkers, hangars, taxiways). During war time Deelen had three concrete runways of which only the north/south one was adapted to NATO standards in the late 1950s. Because of the large size of the airbase there are no possibilities to approach the runway from the outside of the aerodrome. But ample views of taxiways and platforms can be found, mainly on the east side of the aerodrome.

Unfortunately the public transport system is inconvenient to get to Deelen. Only a school bus service is available between Arnhem and Hoenderloo. So during the weekends no public transport is available. By car the aerodrome of Deelen can be found when driving along the Hoenderloseweg. This road originates north from the Koningsweg on the east side of the village of Schaarsbergen. Parking along the Hoenderloseweg is not allowed, but for tourists visiting the Deelerwoud a small parking area is available, close to the Museum Vliegbasis Deelen.

Along the Deelenseweg, north of Deelen, a good view can be found on the final approach of runway 19. But since late 1990, a large portion of the runway is withdrawn from use. Glider tugs are the only fixed wing aircraft that continue operations at Deelen. These aircraft operate quite far from this position. The restoration of military operations that require C-130s have been considered, but this requires a refurbishment of the runway. In the mean time runway 19 is unsuitable for military operations with fixed wing aircraft. Parking along the Deelenseweg is not approved, so park your car at another spot.

On the north side of Deelen a small spot can be found that provides a good view on the intersection of runway 19. The taxiway leading to this intersection is occasionally used by helicopters operating from Deelen. To get to this spot requires a 5 minutes walk from the public road on the north side of Deelen along the fence surrounding the aerodrome. Taking photographs here requires 300-400 mm. Best to park your car in Deelen and walk along the Deelenseweg to the north. Before you enter the forest, walk to and along the fence until you see the taxiway and runway.

After to the closure of Soesterberg in 2008 some new platforms were made on the west side of the AIS-buildings, on the north side of Deelen. These platforms are frequently used for the refuelling of helicopters. To get to this spot requires a 10 minutes walk from a parking space near the Museum Vliegbasis Deelen. Taking photographs here requires 100-300 mm. Park your car near the museum and walk along the fields towards the fence.

The Museum Vliegbasis Deelen houses an interesting collection, including WW2 aircraft remains and an Auster reconnaissance aircraft. But the museum is open at Saturdays and Sundays only. The back garden of the museum provides a nice overview on the dispersal area at the east of Deelen. Taking photographs here requires 300-400 mm.

Long time ago, when the Piper Cub was still in use with the Netherlands Air Force, a small airstrip could be found in the south east corner of Deelen airbase. When Deelen was closed as an active airbase, trees were planted here. Some ten years ago this place was called "Veteranenbos" and opened for public access. Park your car along the Hoenderloseweg and have a 10 minutes walk to the west end of the woods which provides a good view on taxiway and on dispersal area. This location is very suitable for taking photographs from helicopters, if operating from the dispersals here.

Until 1995 this platform was used by 300 Squadron, using Alouettes at that time. Since then the south west platform was abandoned. Subsequent to the closure of Soesterberg in 2008, the platform was refurbished to serve future helicopter operations. But during recent military exercises the platform was only used by vehicles, supporting the operations. Take a right at the Hoederloseweg onto the Koningsweg and then the second right onto the Deelenseweg all the way to the end.

In the late 1990s the buildings of the technical training school of the Netherlands Air Force (LETS) were reassigned to the army. Inside their barracks a small museum is situated, housing the historical collection of the Garderegiment Grenadiers en Jagers. Near this museum a Republic RF-84F Thunderflash can be found. The museum however is only opened on Wednesdays and Thursdays during the summer. And taking photographs of the aircraft requires prior permission. To arrive here, take the Koningsweg from the Hoederloseweg and then the first right onto the Clement van Maasdijklaan. 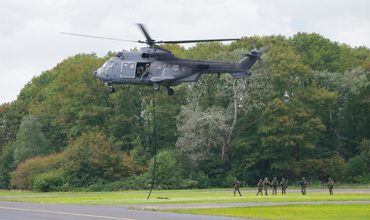 Gerben Tornij took this picture from spot 5, from the Veteranenbos, after a firm walk. 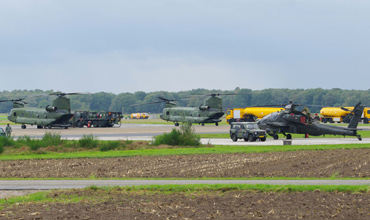 Spot 3 is the place to make these kind of shots, as shown by Gerben Tornij.