Campo de Marte is the general aviation airfield of São Paulo. Apart from aero clubs and air taxi services, many with helicopters, there is also a military police unit with helicopters and of course the FAB with the Parque Material Aeronautico São Paulo responsible for F-5 and C-115 overhaul.

The airport is simply divided in a northern and southern part. The north is totally occupied by FAB's PAMA-SP, whereas the south houses the many general aviation hangars.

The airfield is in the north of São Paulo. Coming from the east or west, simply follow BR-116 into the city and follow the signposts to the northern bus terminal that is named Rodoviário de Tiéte.

From the east, take the northern shore of Rio Tiéte when the BR-116 ends. Head westbound on Avenida Morvan Dias de Figueiredo. Stay on this and after take a right at the fourth bridge, this is Santos Dumont. That is the one after the bus terminal exit.

From the west the BR-116 becomes Rod. Regis Bittencourt. You will be on this for quite a while passing through the suburbs of Embu and Taboão da Serra, after that the road is named Av.Prf. Francisco Morato. After crossing the river, Rio Pinheiros, you should be on Eusebio Matosa for a short while and then on Avenida Reboucas heading for the city centre. The road changes name yet again at the Praca Jose Molina and is Consolacao after that. After the cemetery, that will be on your left hand side, the road bends to the right past Praca Franklin Roosevelt. You come to a major cross road, go right. You should now be on Nove de Julho. Go left at the next crossing, the road should still be called Tun. Ligacao Nove de Julho, follow this through the parque, Praca Rames de Acevedo. After the prak the road will bend to the left a bit and become Avenida Prestes Maia. This goes northbound along the railway line. After the railway crossing, it will be named Avenida Tiradentes. You will pass the Praca da Luz on your left. After crossing the railroad again, you will be at Santos Dumont at last! Past the Praca Armena, over the bridge on the river Tiéte and there is Marte airport.

When arriving from the northwest, simply follow either SP-280, SP-312, SP-330, or SP-348 until you hit the river bank. Follow the river eastbound until you reach Av. Santos Dumont. This is also an alternative route for the eastern approach described before, when getting to the river Pinheiros after the BR-116 has ended, simply follow this river northbound after crossing it on Av. das Nacoes Unidades. This will become the south bank of Tiéte river after the merging point between these two. Now stay on the south bank until you reach Santos Dumont. It will be just after the enormous sports complex on the north bank.

From the Tiéte bus terminal

The bus terminal Tiéte is within walking distance from Mart airfield. Buses to and from Guarulhos stop here as well. Exit the terminal on the west side, past the metro station. Go down the stairs and head north along Cruzeiro do Sul, take the first left. This will be Ildefonso or maybe Lidia Clemente. Both lead to R. Voluntarios da Patria. Follow this round to Paineira do Campo, go left again an you should soon arrive at the roundabout. The rest is self explanatory.

The first spot is at the threshold of runway 30. The wide grass-covered shoulders of Avenida Santos Dumont offer plenty of possibilities to watch the activities. The first hangar in the northeast corner houses the F-5 maintenance, and occasionally a peek in there is possible. The C-115 are at the far end, seen from this psot.

The general aviation area has a gate of its own. However, permission can be granted when visiting the aeroclub of São Paulo for instance. Just ask around, looking is no problem normally. From this side you can have a look at the PAMA-AF which is exactly opposite.

The west side is more difficult. The threshold is hidden behind a tennis park, houses, and a wall. Try to find a quit spot along Avenida Braz Leme.

Do not bother trying to find a spot on the north side, buildings, bushes and a wall obscure the view. Moreover, all apartment buildings are fenced off as well. So no gaining height here... 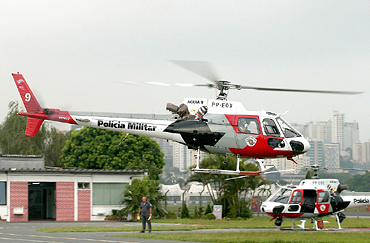