Arlanda is Sweden's busiest airport. Among a busy domestic SAS hub, which includes Skyways, a lot of European airlines can be seen here. As Copenhagen is the main SAS intercontinental hub, only two SAS widebodies are flying from Stockholm. During the late evening and early night about eight West Air Sweden flights are using the stands of T3 for their cargo activities. Other cargo airlines flying here are FedEx, UPS, DHL, TNT and Falcon Air (passengers during daytime as well). A lot of flights from Finland can be seen here, are operated by Blue1 and Finnair. Highlights also include aircraft from the Baltic states.

Arlanda has two parallel north-south runways and a crosswind runway. They are connected through a circular taxiway system, like for example Amsterdam-Schiphol. The airport is surrounded by woods and farmland.

Highway E4 from Stockholm to Uppsala passes west of the airport. The distance to Stockholm centre is about 50 km.
The cheapest way to get to Arlanda is to take a Flygbus from Stockholm Central Station (and some other stops) to the airport. They run frequently during the whole day.
Another way is to take a special train services from Central Station. The SL commuter train runs from Stockholm Central Station. To get to the airport take line 36 to Märsta and then bus 583 towards Arlanda. Busses that depart from Märsta XX:17 and XX:47 only runs to the SAS Hangars. Busses that departs from Märsta XX:02 and XX:32 runs all the way to the end station Halmsjön(the lake north of runway 01R/19L). The bus stop Tomta is located at the approach lights runway 01L. The bus stop Cargo City is located at the cargo area.

There are four terminals (2, 3, 4 and 5) at Arlanda. Terminal 2 and 5 are in use for international traffic. Terminal 3 is for Skyways domestic flights and nightly West Air Sweden cargo flights. Terminal 4 is the SAS domestic terminal. As T3 is domestic, you are allowed to walk into the pier to the end. This gives you a good view of the south hangar area, T2, the south side of T4 and the cargo area.
In between T4 and T5 is the SkyCity building, where the Radisson Hotel and a lot of shops and restaurants are located. From here you have an excellent view of the other side of T4 and the south stands of T5. In T5, in the middle on the upper level, is also a restaurant which offers good views of the aircraft parked in front of T5 and traffic on runway 08/26.
Outside terminal 2 you can shoot aircraft parked at stand 69 (some lightpoles might block your view). Sometimes aircraft remote park here.

From the cargo area you have a clear view of Terminal 2 and part of T3. There are numerous photospots along the fence, and when they use 01L for departures, good shots can be taken from here. Next to the road that runs along the east side of the cargo ramp there is a hill that you can stand on and shoot over the fence. Also there are possibilities to shoot the parked cargo aircraft. Note that the road is only for busses so park your car at the cargo area (Cargo City).

If you drive on the road that goes to the cargo area (signposted as Cargo City) there is a small parking lot to your left. You can either stay at your car or walk down to the approach lights.
As alternative you can go to the former rescue training school, a couple of hundred meters along the left side of 01L. A primitive grandstand has been erected close to the fence left of this runway.

There are a few places between the hangars to see the parked aircraft. There is a good spot with clear view and photo possibilities of the ramp with smaller international traffic in front of the large SAS hangar. At the far end is also an appron where bizjets are parked. Here also two of the stored Caravelles are usually parked. In between the hangars is the northern taxiway to runway 01R/19L. Along this taxiway there are a lot of good spots to take pictures.

A new spotting pavillion has been built by the Swedish Aviation Historical Society and the airport authorities west of little lake north of runway 01R/19L. It is situated on a hill, and good pics can be taken of aircraft taxying only some 75 meters away.

Coming from the airport if you take the first road left off road 273 after the lake you reach the landing of runway 26. Just before you reach the runway end there is a small road to your left. Park your car here and walk on the forest path for about 50 meters. Here is a couple of wooden pallets that you can stand on to shoot over the fence. You can also take good landing shots on both sides of the approach lights. The light on the south side of runway 26 is good from about 08:00-15:00 (summer) and in winter all day.
Just before the turn off to the small road to the left lies Patria Helicopters. Park your car here and follow the fence up in the woods (maybe 200-250 meters). Here you can stand on a hill and shoot over the fence. You have the touchdown point just in front of you. This spot works for take-offs from runway 08 as well.

When the are using this runway, there are good places to take pictures at the threshold of 19L near the Ibis hotel. From the spotting pavillion you can shoot also shoot aircraft landing on runway 19L. 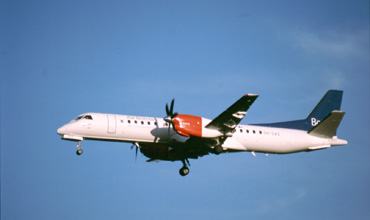 Air Botnia, now Blue1, is frequently operating into Arlanda. This picture has been taken at spot 6. Photo by Mark van der Molen 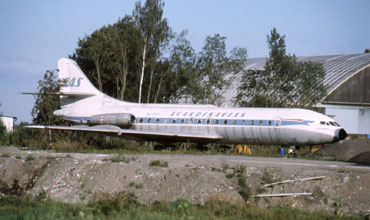 This former Scandinavian Caravelle is property of the local museum. It is stored at the far end of the apron. Photo by Mark van der Molen