Niederstetten was one of the ever rarer places to find Huey helicopters, operated by the resident THR30. This unit has however now transitioned to the NH90, the lovely UH-1 being officially waved off on 6 June 2020. This army base is not often visited and when it is, that is often by base tour. Nevertheless, arrivals and departures can be caught well from the outside. Apron and hangar views are however very difficult.

The airfield is situated on the edge of a plateau, with terrain sloping down on the north, west and south sides. The base has an east-west runway with grass strips north and south of it. The main runway was extended to the west to just over 1300m by 2011. The various military aprons and hangars are on the south side while the north is occupied by a barracks and living quarters area. The northeastern corner houses a modest general aviation area.

The field lies just west of the town it has its name from, along the L1020 to Wildentierenbach. On a larger scale, this is some 45km south of Würzburg, roughly in the middle of a triangle formed by the A6, A7 and A81 Autobahnen. Obviously, the most practicle way to get there is by car. Small but publicly accessibe roads surround the field, so the easiest way (but not necessarily the shortest) to reach any spot is to start from the L1020, at the first turn-off after leaving Niederstetten town. This is also the entrance to the base's main gate.

This spot is where the former through road, that used to brush the old runway 07 threshold, now ends at the fence as a rural track. It can be used for photos in the evening of traffic landing from, or departing to, the west. To arrive here from the starting point described under 'Getting there', follow the perimter road 'Am Flugplatz' counterclockwise around the base, staying as close to it as possible.

This more conventional spot, south of the centreline, is along the paved roads but noticeably lower than the airfield itself. Therefore, only flying traffic can be seen, but it is good for both landings on 07 and departures from 25 most of the day. From spot 1, return to the paved road and initially head west, then turn sharp left at the first junction to head back to the field. Alternatively, use the Heftensteige directly from Niederstetten. In the town, it is the road directly south of, and parallel to, the L1020. The spot is easily found as it is where the artificial mound for the lengthened runway starts. A short piece of the old road is dead-ending at the fence there. From this spot, there is a very short connection to spot 3, along the southern perimeter and control tower. Turn left at the first paved road after the base and you are at the next spot.

The quickest way to reach the eastern approach from the L1020 is to turn off at the second junction from Niederstetten town and then turn left immediately onto the perimeter road. Just keep following this along the fences until you cross the approach lights, which is when you have arrived. When coming from Wildentierenbach, take the road parallel to the L1020 on the left side when leaving the village, and turn left along the fence when you reach the field. Like the other side, it is good for landings and departures on this side of the field and again, you are lower than the runway here. Alternatively, the farm track along the fence, from the southeast corner of the base, can be tried but this is probably not worth the attention it will attract. Aditionally, the drive between spots 2 and 3, to catch traffic on the other side, is less than two minutes so it may be wise to stay close to the car.

A small stretch of road runs along the fence enclosing the GA area, where traffic up to a Citation may be seen. This spot is right along the taxiway there. A well-timed walk here, preferably bringing steps, may yield a nice close-in photo of a business or leasure plane. 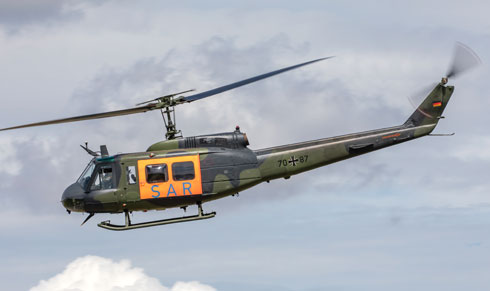 Both runway ends are less than a two-minute drive apart via the southern perimeter. Frank Noort used this option to not miss a departure by one of the last UH-1s and frame it from spot 2. 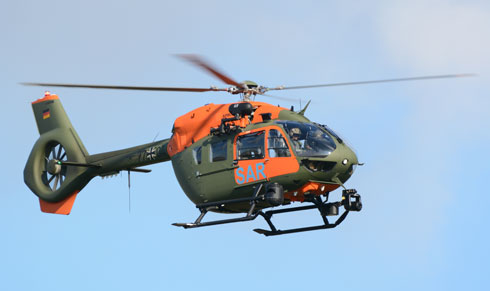 The east side is excellent for arrivals, just like the west side. Early on Summer evenings, the light is best north of the centreline, as shown with this H145 by Arjan van der Rijt.